I collected these 4 beauties from the vege garden yesterday.  I kept some seeds from a pumpkin that we had, and they had dried for probably 12 months.  They have pretty well taken over the vege garden, so will plant them somewhere else next time, maybe in the back area that we don't really seem to use much.  We also had to hand pollinate most of these, as none of them seemed to be taking.  We still have about 3 or 4 up there at the moment, which are nearly ready. We have already harvested 2 pumpkins previously, but we are hoping for a few more yet, to make the crop worthwhile.  If all of the pumpkins grew that flowered, we would be inundated with them!, but we weren't aware that we would need to hand pollinate until we worked out that they just weren't going to continue to grow unless we did.  Some bee hives in the backyard would be really handy I think! 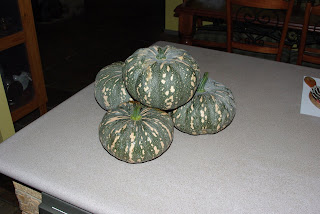