Vege garden, Sunday and a near tragedy....

I took Kasey to a Gymnastics open day today, she seemed to really enjoy it. I have booked her in to a school holiday program for a couple of hours tomorrow, and will see what she thinks. If she really likes it, I may book her in to the actual program during school terms. Today I sowed some carrot seeds in the vege garden, cleaned out the chook pen, and placed new straw, pulled out the last of the carrots from the last crop, along with some sweet potato and corn. This is today's harvest: 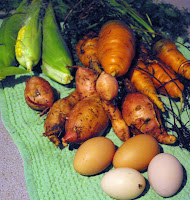 Kasey enjoying a freshly picked carrot from the vege garden.. 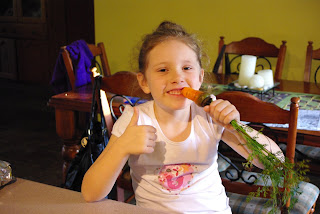 I am going to keep the small cob of corn for seeds, as the corn has been delicious, very sweet and juicy, so I would definitely like to grow some more of this variety, as I think it is the nicest corn we have ever had. I think there will be about 150 seeds on the small cob, so I have it in the pantry in a mesh bag to dry for a few weeks. I will probably buy some more in the meantime and plant another crop very shortly. While getting the straw out of the storage shed this afternoon, I discovered a batch of rats in there, Max has turned out to have very good ratting abilities, and made short work of 1, but the rest scattered and took off, but I will let him in there each afternoon to try and get rid of the rest. While I don't like the idea of killing anything, a plague of rats is definitely not needed, and I think Max taking care of 1 in a couple of seconds is much more preferable to baiting them, which to me is inhumane. I also spread some more straw around the vege garden where needed. Last night, I made my first attempt at a crocheted dishcloth. It has turned out ok, a few missed stiches here and there, but practice should improve things. I think I may knit them in future though, as crocheting seems to use way more wool, even though it's quicker.

Toni had a bad night last night, and equally bad day today. As she was leaving a party last night, a very drunk girl jumped in front of her and laid on her bonnet, and fell off and hit her head on the bitumen, and is in hospital with a hairline fracture to her skull, bruising on her brain etc. Luckily, Toni was in first gear and only going about 5 klms an hour, but an ambulance was called and the police turned up, and breath tested Toni who returned a 0.00 result, and the police have told her she was not at fault and have cleared her of any charges or traffic infringements, but Toni feels awful as this girl is a friend of hers.  She has been crying all day, and is worried that her friends are going to blame her, and she has been feeling sick all day about it. It just really irks me that people do such irresponsible things, which causes distress to others. The girl is going to be ok apparently, but will be in hospital for a few days, and she can't remember what happened. It is a very hard lesson for her to learn though. I can only imagine how bad it could have been it Toni had been going faster, or had had a drink at the party....
Posted by Debra K at 8:55 PM