Caught up with Tammy for coffee yesterday. We were there for 3 hours! It was a long chat. Tammy has done welfare and counselling, so she had quite an in depth talk with Toni while we were there about Sat night, to try and clear things in her head for her. We finally heard from the girls family today, who have said that she is being discharged from hospital today, and that they don't hold anyone responsible, and that it was just a terrible accident. All well and good, but I am afraid that I do hold this girl responsible, it was her decision to totally wipe herself out with alcohol and jump on my daughters bonnet and seriously injure herself, and cause Toni such distress in the process, I am really happy that she is ok, and no serious damage has been done, but seeing how upset Toni has been over the last few days has been really hard to deal with, I just hope that everyone that was at this party has learnt something, I would hate to see no lessons learnt out of all of this, at least this girl's parents are now aware that there teenage daughter is wiping herself out with alcohol and can maybe monitor this a bit, I am not naive enough to think that Toni does not ever have a drink, but I know that having her licence and her driving to these things means that she won't be drinking, I know that she would never drink drive, she does take after me in this respect, I have never ever driven after drinking, and I know she feels exactly the same as me about this, thank goodness.....anyway....hopefully everyone can move on now....On a happier note, I recently reserved a permaculture book from the library, and picked it up today, so this will be my before bed reading for the next few weeks. 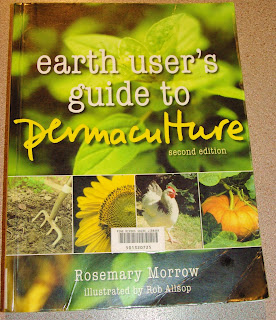 I am really interested in learning about the permaculture way of doing things. There is a course I could go and do , but it is nearly $1200, and I may still go and do it yet, but if I can learn everything out of a book, I would like to, even though I do love doing the practical side of learning, and find that I usually learn better that way these days...my brain definitely does not take to learning theory as well as it used to in my teens and twenties and even early thirties. I am also waiting on a permaculture design book to come in to the library that I have reserved, and will read that as well, much cheaper than spending $200 to buy it online.  I would really love to totally immerse myself in this way of doing things, and get more animals and spend most of my time outdoors.....but I haven't been game to commit to more animals, having horses was a really big commitment, and I think it has taken me a couple of years of not having them to get over the amount of time and effort that took, not to mention money! Damian called them the 4 legged money pits, the whole time I had them, which was true to a degree, and I found that I no longer had the really relaxed disposition around them that I had when I was much younger, and you really need that to be able to deal with the skittishness that they have. I also found that I no longer really enjoyed riding them due to the same reasons. I would really love alpacas, a donkey and miniature goats, even a miniature horse would be lovely, gorgeous animals, a bit quieter, and lovely manure for the gardens, and lawnmowers in the process....Damian would like sheep or a small cow as he would like to have them for the meat side of things, but if I had a cow I would want a milking one, and I definitely don't want to commit to milking a cow twice a day right now....maybe down the track I may get my head around that!
Posted by Debra K at 6:31 PM