I had some Christmas baubles left over after decorating the Christmas tree, so used these in a big glass vase as a decoration. 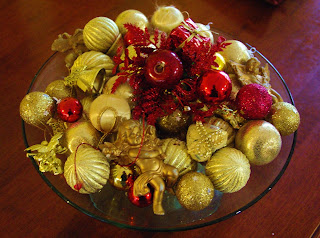 This is a table centrepiece I picked up at Lifeline for $2.50.  I have added a couple more decorations to it, and the candle, but mostly it is as I purchased it.  I will add some more to it for next year. 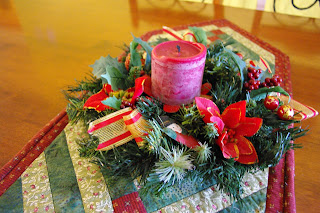 I also thought it was time I brightened up the front door wreath.  I didn't originally make this one too fancy, as it actually has fairy lights entwined around it, but I don't plug them in very often, so thought I would brighten it up so it looks nice when the lights aren't turned on. 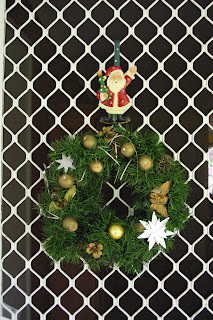 I had a few xmas picks, and I sprayed the flowers red, and sprayed the apples green, and then sprayed the whole wreath in glitter spray for some added sparkle.  It looks much nicer now. 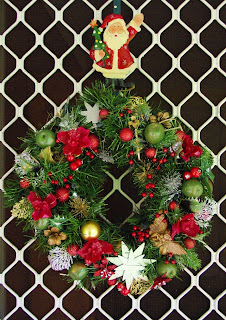 At the moment I am making onion jam, and then I will put together the last minute hampers for the last couple of gifts to go under the tree.  I was in and out of the shops nice and early this morning, and I was home before 9.30, just as the shops looked like they were really starting to busy up...I'm so glad I was out of there nice and early, the traffic was getting quite congested even at that time of the day.  I got quite a few nice little last minute gifts from Aldi as stocking fillers...anyway, better go and check on the onions...my eyes are feeling a bit better now, I was crying profusely after slicing 1 1/2 kilos up!!
Posted by Debra K at 3:31 PM