I went to the markets on Sunday morning, to get some seedlings for the vegie garden, to do the autumn plantings. I bought lettuce, red chard, sugarloaf cabbage, mixed green lettuce, rocket and a couple of comfrey plants to put under a couple of fruit trees. Comfrey is very deep rooted, and draws up the nutrients from deep down in the soil, but don't compete with the fruit trees for nutrients, so they are perfect for under fruit trees as a type of nursery plant. So these are now all planted in the vegie garden. I have also finally planted up my mushroom patch, I bought the kit last year, and have been meaning and meaning and meaning to plant it...finally got around to it today. It will be interesting to see how well they go, when I grew the shiitake mushrooms last year, they went really well, so I am hoping these give similar results. 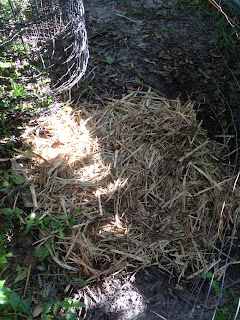 I also picked up a couple of chinese silkies while at the markets, they are so gorgeous. 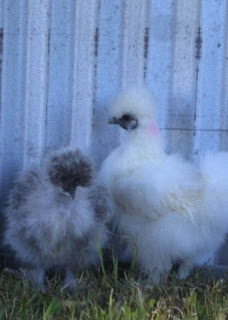 So these are now in the chicken tractor along with the 3 younger guinea fowl I have, 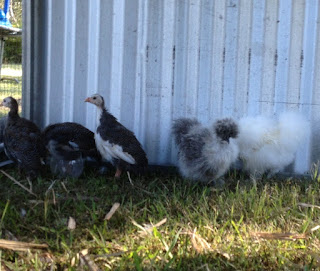 and also with the mother hen and her 6 babies. The mother hen doesn't like it if the silkies or guinea fowl go anywhere near her babies, but they in no way have any intention of hurting the babies, she is just being very protective.

(When can we go out there Mum?) 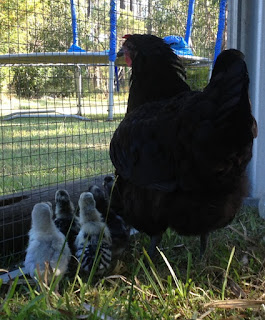 While we were at the market, Kasey spied a guinea pig, she has been asking for one for ages, so I relented, so we now have a little boy guinea pig named Toffee. 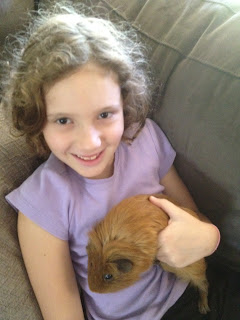 Kasey has been lugging him around everywhere, with her, not outside though, as the dogs would definitely think he is a rat...and that wouldn't be a good outcome. We have been having a few dog problems anyway, the dogs have been getting out during the night and visiting the neighbouring properties. Reggie has also unfortunately started killing chooks, I have lost 1 along with 5 guinea fowl, and the neighbour came to see me yesterday to tell me the dogs have been getting out during the night as she was up quite early and saw the dogs scooting just straight underneath everyone's fences, and she has lost 5 chickens over the last 2 weeks...I am not happy, it means that Reg has definitely got the taste for chook killing now, and I don't know how to get him out of it. I caught him attacking one of my chooks last week, which was lucky enough to survive, but about half an hour later he got another, who wasn't so lucky unfortunately.  I purchased an electric collar, but that is only useful if you are watching to correct the behaviour. I re ran the electric fence around the perimeter, but they still got through that, and Reggie is now jumping a 5 foot high brick fence at the front of the property. Michael is home this week, and as Reggie is his dog, I made him go down the front and do some training with him to stop him jumping the fence. I am now tying the dogs up overnight, and we are getting an electronic containment system installed on Thursday. That's money I really didn't want to spend right now, but I can't have them getting out. Max and Diesel are both fine with the chooks, and I don't want them learning from Reg to start killing them. At the moment the chooks are permanently in their pen, until I can sort out what to do. At the moment I am thinking that we are going to need to fence off the back area so the dogs can't go in so the chooks can free range up there, but it still leaves the problem with the guinea fowl, not sure if clipping their wings would work for the guinea fowl, I will need to do some research on that. That's really frustrating though, as I am holding off doing a lot of more permanent things here, as we will be relocating to the new property....but that is probably still 12 months away...but I would rather do more things like that at the new property, but I need to make sure the chooks are safe...very frustrating. The carpenter came this afternoon to install the new ironing centre in the laundry, 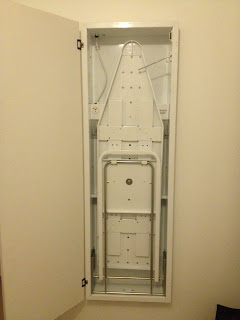 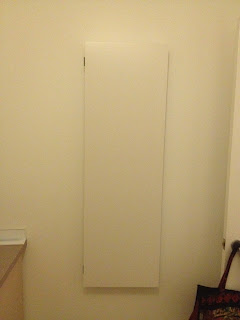 The electrician is coming tomorrow to wire it up, as well as install the new cooking appliances is the kitchen, as well as some extra lighting and power points needed around the place. Also been busy organising the packing for our holiday at Easter, Damian isn't home until really late Thursday night, and we are wanting to head up to the property on Friday morning, so I need to get as much done as I can before he gets home, so that is stressing me a bit, I was planning on starting last week, but I just haven't got to it. I have been spending at least my hour in the garden each day as the weather has been really nice,  that's the brilliant thing about autumn...warm days and cool nights. Anyway, early to bed tonight to catch up on some much needed rest.
Posted by Debra K at 9:27 PM