I have had a busy couple of days. I was so sick of trying to scrounge my way through some of the kitchen cupboards and drawers to find things, I just started on one of my big pot drawers with all of the baking trays, as I just updated my baking trays as my old ones were looking really grungy, and then it just sort of steam rolled from there...before I knew it, my car was full of kitchen appliances, old plastics, trays, etc etc, but I can actually find things in there now...so I donated it all to the charity store, and on Saturday night I completely overhauled the linen cupboard, because I was sick of chucking the towels and linen in the cupboard and quickly shutting the doors so things would stay in there...so now we only have about a dozen towels, teatowels and washers, and a few sets of sheets, etc, but still absolutely plenty of linen. Getting the cupboards re-done will be on the agenda very shortly, as they all need to be re-shelved, so I wanted to cull the contents down as much as possible, so that it's easier when I have to empty them all out to paint, before getting the new shelving put in, and the new doors on. The excess linen absolutely filled the entire back of my car to the brim....but looks so much better now. I spent the weekend using up some of the produce in the freezer, and made up 5 1/2 kilos of pasta sauce base out of the home grown tomatoes from last season 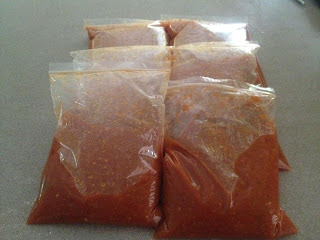 It is now all in the deep freeze. I also used up the rhubarb from last season, and made up 2 rhubarb crumbles, These are extremely yummy, especially with some home made custard, I also made up some rhubarb muffins, but they ended up way too moist in the centre, so I gave them to the chooks, so will change the recipe a little as they would have been really yummy if a bit lighter in the middle. I also made up some banana chocolate muffins, and these got the thumbs up from Kasey 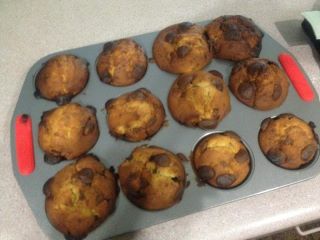 So, we will be back up at the property later in the week, Damian should be going up Tuesday to get the machines in to prep for the slab for the shed, and they are going to pour the slab next Saturday. The cattle sales will be on  the Monday, but it will depend on a few things whether we will be able to get cattle this time around, as we need to be on the property for a least a few days after we get them to keep them in the yards and feed them etc, so I am not sure whether we can manage that with school starting back tomorrow. Kasey is so excited, she went to bed nearly on time, and has her bag packed and her school clothes out already, so I am nice and inspired to make her a nice healthy, yummy lunch in the morning, and then take her and settle her in for her first day in grade 3. So, probably another busy week coming up, I have to finish a baby blanket for a friend, so I will need to pull the sewing machine back out and get that done, and a few wedding preservations to finish off to get those out the door, and then I am going to only take on very limited wedding work for the rest of the year while we are working out the new property and travelling back and forth between here and there. So, a very productive weekend, and it looks like some more rain coming our way this week, which will be great for the gardens.