Snakes, New Life on the farm and other stuff

Someone up there certainly likes to make my life interesting that's for sure. Damian's parents and sister came up to the farm for the weekend to see the property and for my birthday. Toni also turned up to surprise me on Saturday afternoon and stayed until Tuesday. I was having a real downer of a birthday missing the big kids until Toni turned up, it made my day immensely. I ended up having a lovely day. Damian and Toni bought me a really nice pair of western boots, they even have purple stitching! 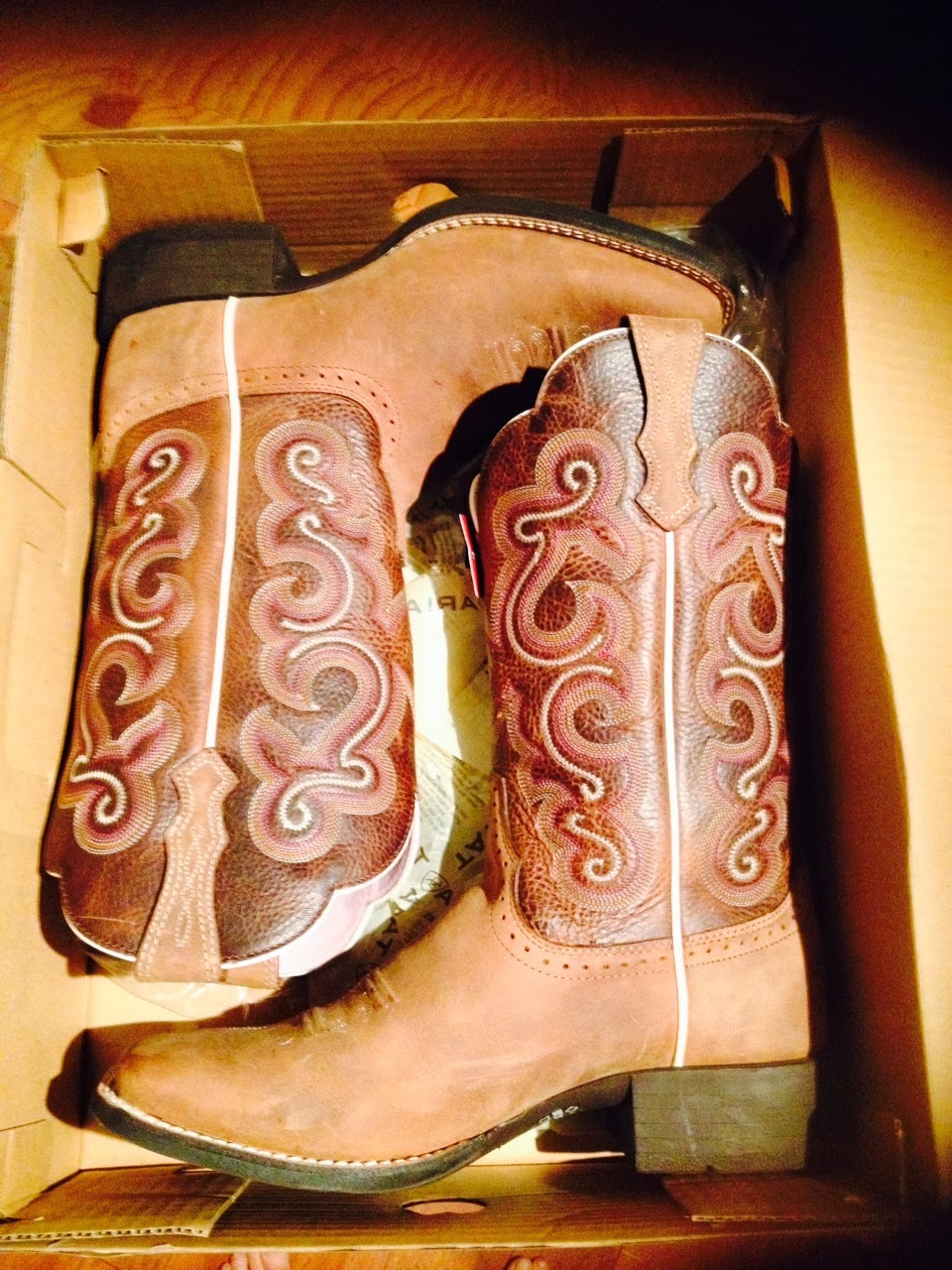 Love them! So on Sunday we had just finished having breakfast, when out of the corner of our eye a snake was noticed slithering along the concrete in the shed. It was quite small and had a head similar to the red naped snake, but the underside of it's belly had the orange spots of a brown snake. Needless to say that snake was quickly relocated. Then a bit later on that day Damian was searching through a box of poly fittings so he could hook up the water trough, and nearly put his hand on a snake hiding at the bottom of the box, luckily this snake was not a dangerous one. Here we are trying to ascertain what we are dealing with.
We really wanted to try and identify what we were dealing with before calling a snake catcher. So we googled the snakes found around our area, and found that it was a brown tree snake. 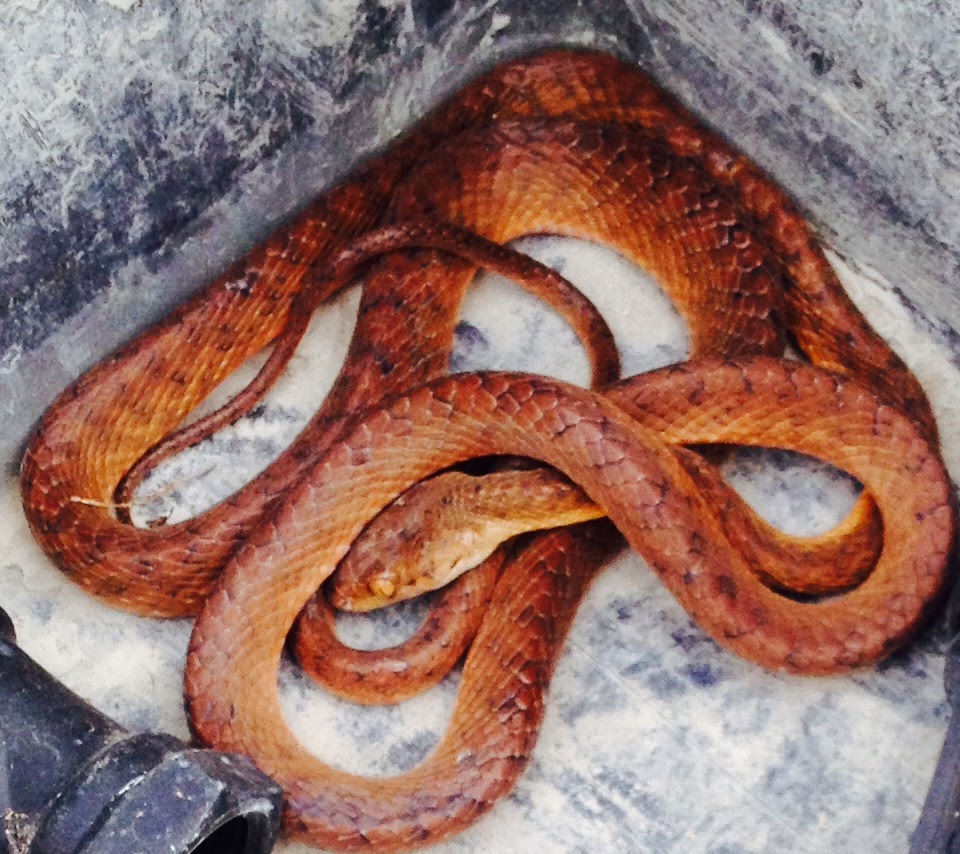 We loaded it in to a bin with a lid with the help of a broom, and Damian took it down to the dam and put it up a tree down there.The 3 snakes we have seen in the last couple of weeks have all been down the end of the house where the snake detector seems to be a bit dodgy, so I think we will return it for a replacement. This morning I went out to check on the guinea fowl as she was due to have her babies, and I found 3 babies under her, and another 2 by lunchtime. I have relocated all the babies in to a brooder to look after them, as they will only get picked off by birds or snakes if I leave them out with the mum, and guinea fowls have a reputation as not being the best mothers.So far we have 4 cinnamon pied ones, and 1 lavender pied. I don't know where the cinnamon comes in as our adults are all pearl and lavender..I found 1 dead one under her this afternoon, it had managed to hatch, but either suffocated or was squashed by mum...I have heard 2 other eggs either cheeping or rustling, so we'll see if any more hatch over the next 24 hours. 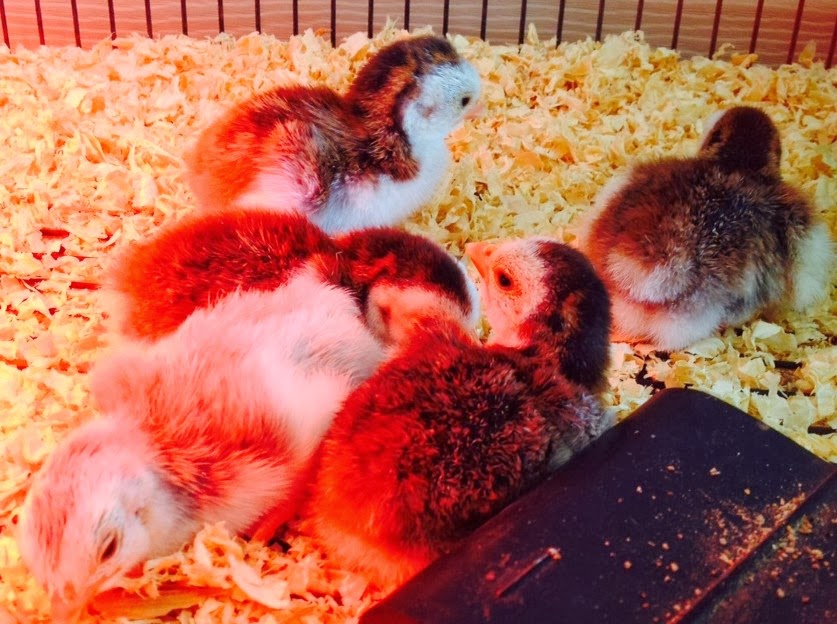 They have all started eating and drinking, and all seem pretty healthy. These little ones will more than double the guinea fowl numbers after we lost 10 to the fox massacre last year, so hopefully it will start to build up stocks again, and hopefully lots of these are girls as we currently have 1 girl to 3 boys! Mum can have all her babies back in 6-8 weeks when they are big enough to look after themselves. I have started back at work this week after school went back, so I have been busy catching up there. Kasey is really happy with her class so far this year, and when we turned up to class on day 1, her friends had saved her a desk next to them, so she was pretty chuffed. Kasey has also asked to start earning pocket money, so I have done up a chore chart for her, and will laminate it and put it on the fridge, so she can tick off her jobs each day, and then re-use it over and over. She will earn $10 a week for completing all her jobs, and nothing if she misses jobs. This is the chart I made up for her, she has daily chores which are smaller ones, and a few larger weekly chores. We have decided to make it an all or nothing deal, otherwise she will just get slack and not want to stick to her deal, and in the real world once you start work, if you don't do your job, you don't have a job..and a good work ethic gets noticed these days. 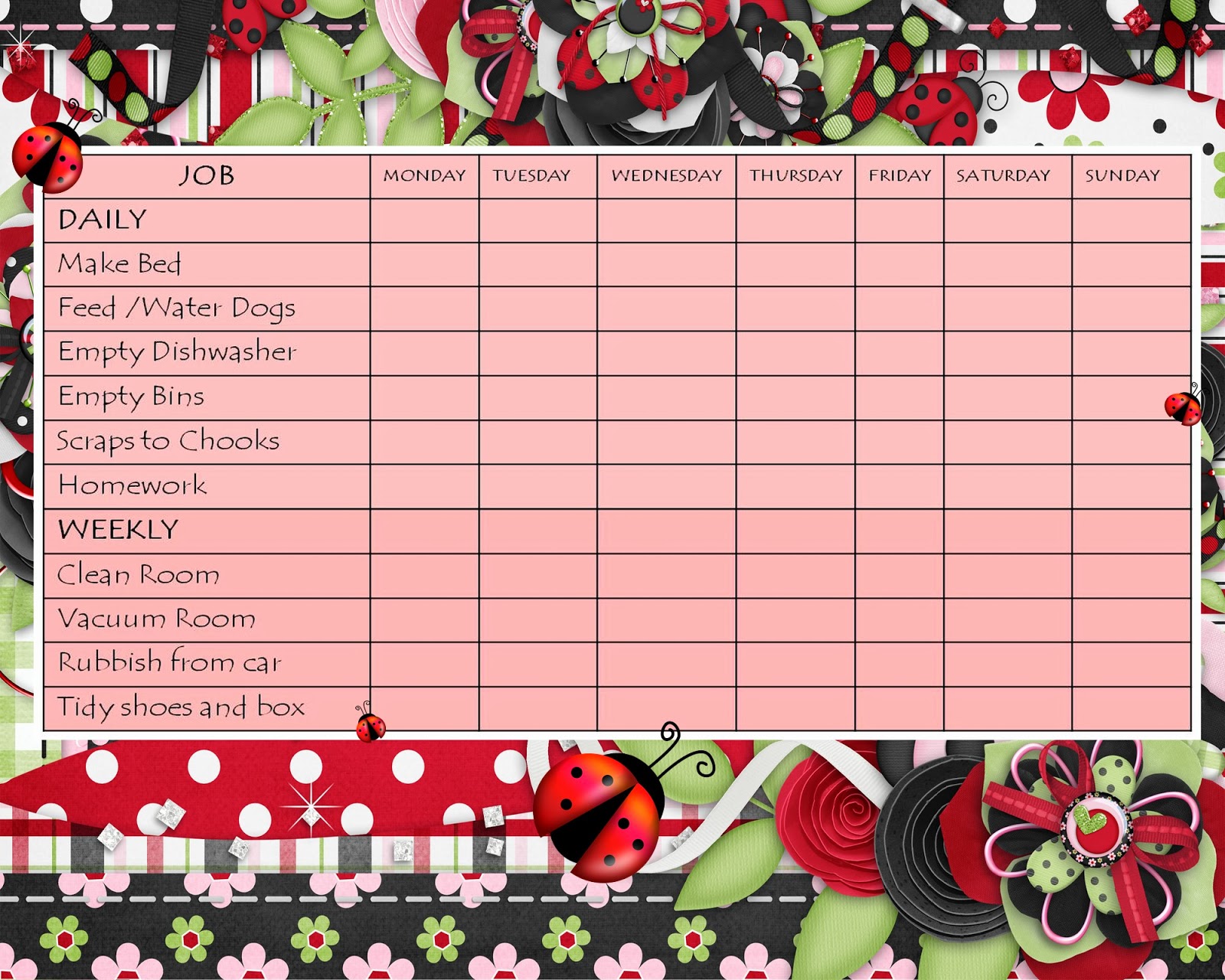 I also received my dvd from the library that I booked, River Cottage Australia. I have watched a few of the episodes online, but this way Damian and I can sit down and watch the whole series. 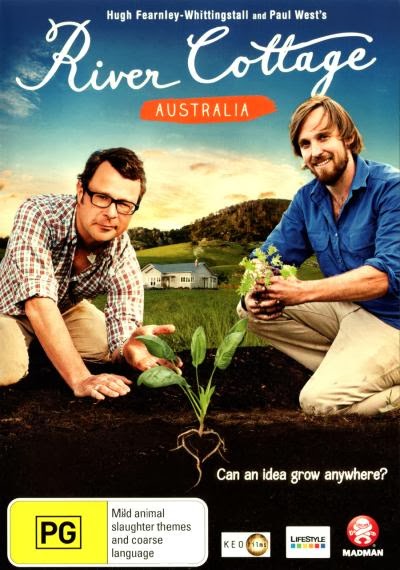 I am possibly heading down to Brisbane this weekend to meet with the real estate agent to finalise renting the house out down there as the real estate market it still slow for our type of house. I am hoping to go to a basket making workshop while I am down there as that is something I have wanted to try for a few years now. And catch up with the kids and pop over to catch up with how much little Grace is growing. xx 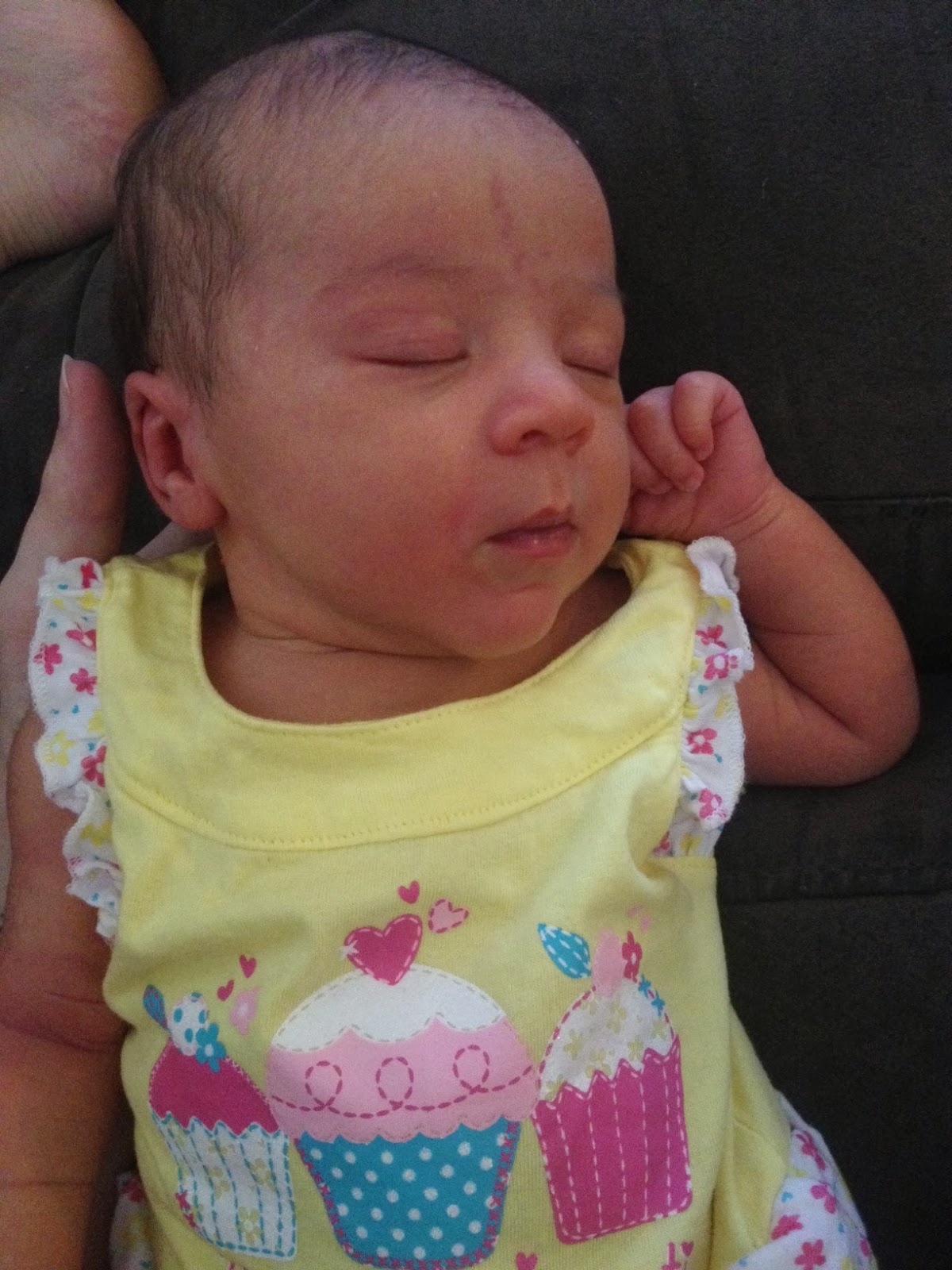