Our first grandchild is due this month, and I bought Kacey a gliding rocking chair for her baby shower in November. The covers on it weren't really in keeping with her nursery theme, so I said I would recover it for her. This is how it looked originally. 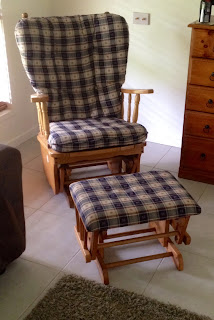 We went to spotlight on New Years eve and purchased some fabric that she liked, so I could make up some new covers. I took the padded footstool off the stool, and recovered it as well. I love how it has come up, it looks brand new, and perfect for the nursery, and for Kacey to feed bub in, and it is sooo comfy. 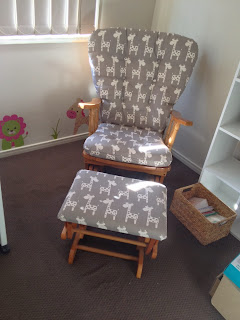 I just took the original covers off, and then traced around them for the new ones, and bought some self covering buttons so I could replace the buttons as well. They have a bit of a jungle animal theme going on, with monkeys, elephants and giraffes, so the giraffe print will go well, and will suit either a boy or girl themed nursery, even though we know we are expecting a grand daughter. It was quite easy, and very quick to recover, and the end result has come up really nicely.
Posted by Debra K at 5:44 PM