Our neighbour on the next property has let us know that he has magically acquired a heifer in with his mob of steers, so it appears our missing cow has been located. He is bringing them all in to the yards in a couple of weeks for dipping, so we will round her up then and bring her back in with ours.  Things have been pretty busy, I took the hereford and Jersey up to the property, we kept them in the smaller paddock for a few days and Damian has let them out on to the rest of the property. They are sticking fairly close to us at the moment, and not heading off with the others at this stage, and we are bringing them up each afternoon for some lucerne. Once I have organised myself a little for being up at the property full time, we will get Nutmeg (the jersey) put in calf, and start to keep her confined a bit closer to us if she is starting to wander the whole property by then, but in the meantime, we will spend as much time as possible being around them to keep them used to us as much as possible. They are pretty used to humans, so hopefully they will stay that way if we keep them close by.
Toni and her boyfriend came up to the property on the same weekend and had a great time riding around and exploring and relaxing. 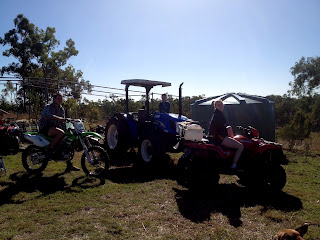 They rode around the boundary while Damian followed on the tractor, so they could detect any logs and things in the grass before he ran over them with the slasher. He now has 2 full widths slashed on the entire boundary, meaning that we can get around the boundary almost all the way now, except for the deep gully, which is really only accessible on horse back, even the 4wd quad has issues with that gully. I look forward to the day that I can ride a horse around the boundaries, as I feel much safer on horse back than on quad bike, Damian is the opposite, he is not a horse person at all, because they have a brain and can make their own decisions :) not like a motorbike or quad bike.  Everything has their merits, I just don't like quad bikes with gullies and hills, but I do have fun riding around on flat safe areas. Kasey had great fun riding around with Damian on the tractor while he slashed the boundary line, it was slow going and took them about an hour and a half to go once around the full way,  but will be much quicker now that the pathway has been cleared. 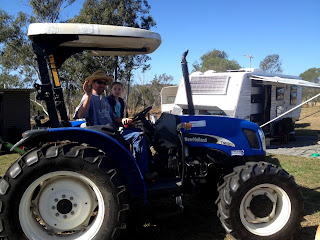 I am heading off to a sewing retreat tomorrow for the weekend with Mum, so Damian has headed back down to the house here for the weekend to take care of Kasey while I have a break. I have lots of projects all cut out ready to sew, so I am looking forward to it.  I collected some rocks to bring back home while at the property, and have been busy doing some garden edging and gardening down here. I am enjoying being outside at the moment, it's very energising. I have also mainly given up sugar, and I have found my energy levels have increased a lot, and I have also changed from low fat foods to full fat foods as I am always hungry on low fat food, and have been battling lethargy for years now. I have found that I am happy now just having my 3 meals a day, and not looking for snacks in between. So with a combination of cutting out sugar and changing my diet, my energy has been given a real boost, and I am much keener to get outside and do things. The vegie garden and the chooks are very therapeutic, and I could spend hours out there, the chooks are so funny to watch, when one gets something yummy, watching her run at full speed trying to get away from the others is a crack up..I think my family thinks I'm a bit nuts getting so much enjoyment out of the chickens, but I know other chicken fans know what I mean. Anyway...this has ended up being a longer story than I intended, so off to catch up on what everyone else has been up to and then bed.
Posted by Debra K at 8:58 PM