Some before shots of the house during renos. Pretty much all of our posessions have been packed away, and the stuff we still needed out to function on a daily basis was moved out to the pergola area. The worst part by far was the floors being done, the slate being removed, it was soooo dusty, we had to wash down every wall in the house as we could write our names in the dust on the walls. 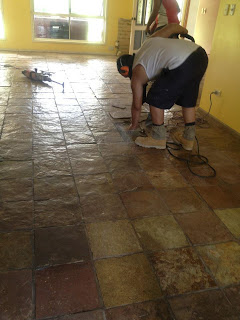 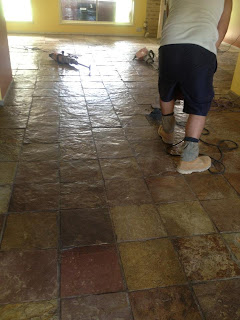 The company that removed the slate were really good, a crew of 5 showed up on time, and just got straight in to it, less than 6 hours later, all the slate was off the floor, the floors were sanded back for the tiler to start the next day, and the slate was being taken away in their trucks. 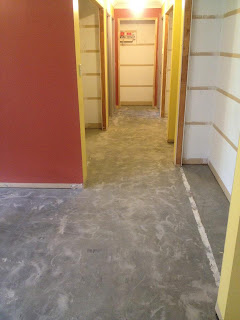 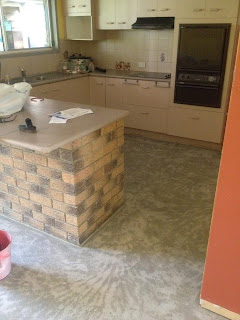 The next day the tilers got to work. 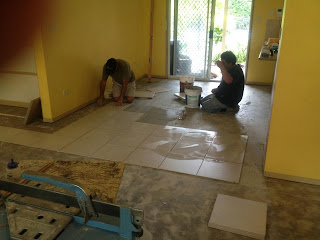 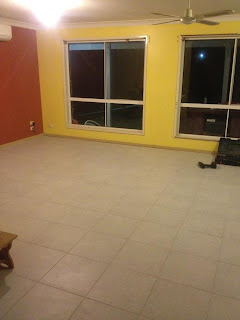 Then Damian started on building the new entry wall, where the brick planter (plant killer) was...it took him 3 days to build this, as it is self supporting and he wanted it all braced off properly so it could hold the tv etc, with no problems. 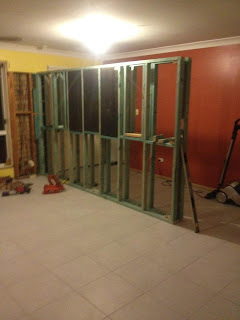 I was going to paint the house in the Illawarra colour, which is the same as what is in the bedrooms and the office, but the common consensus was that it was going to end up too dark, even though I absolutely love the colour. So I ended up going completely white, and I will use the Illawarra as features here and there, that way I can put any colour that I wish to in a room for decoration.
This is the dining room, I still need to finish the window coverings and I am currently doing some home made wall art for the wall. 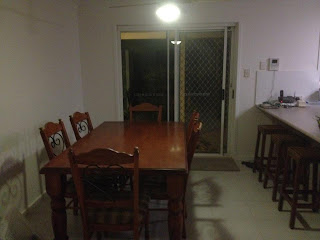 The kitchen has had new handles and a new gloss white splashback so far. The appliances are being replaced with stainless steel ones, and a new stainless steel kick will go around the bases, and the timber blind is to go back up, after that I will assess how it looks, as to whether I need to do the doors or not. 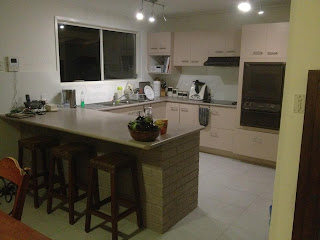 The main lounge area is just about done, I am just waiting for a replacement lounge, I currently have my eye on one on ebay which I hope I can get. 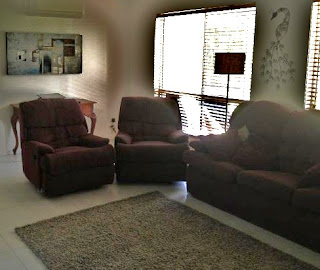 The main bathroom was also completely gutted, and all new fixtures put in. The only thing we re-used was the shower screen, as it was less that 12 months old. The blind also needs to be put back up, and other than that it is finished. 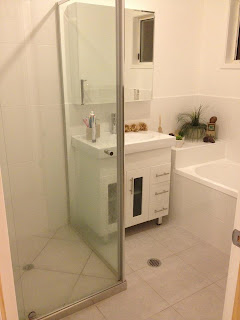 The bedroom is still being decorated. The new blockout blind has gone up, but I am in the process of sewing new cushion covers and a bed runner to compliment the new doona cover, and I also have some ideas that I am working on for the wall art and the pelmets above the blinds. I also need to put the timber blind back up on the smaller window. 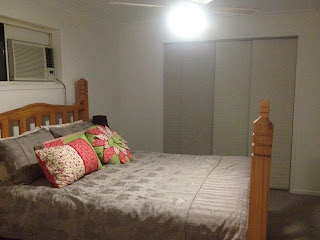 The new front door and entrance where the brick planter used to be. The painter is coming back tomorrow to finish off the door, so it will all be the Illawarra colour then. 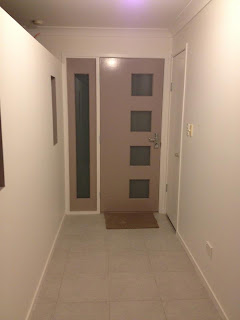 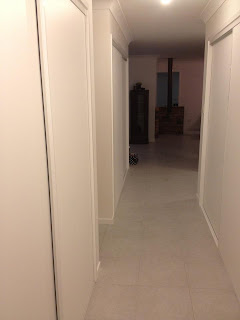 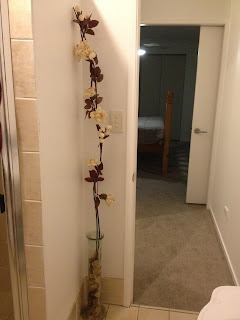 All the cupboards have been re-shelved, including our walk in robe which has had a lovely makeover. 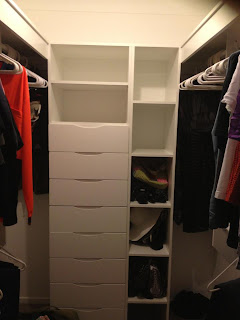 Still a few bits and pieces to finish off on the reno side, and on the decorating side, and then we will start on the garden edging and finishing off the gardens outside, and then we should be able to sit back and enjoy things for a little while.
Posted by Debra K at 9:26 AM