Guess who's expecting 6 new babies tomorrow? I'm hoping she's going to be a good Mum and will adopt her new babies and take them as her own. 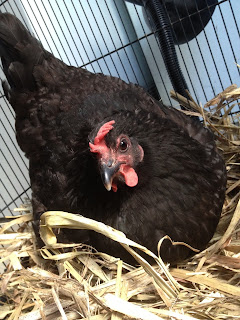 She's been moved over in to a smaller pen in preparation for the impending arrival, and I will pop them under her tomorrow night. It took her about an hour to settle down on her eggs after moving her, but she's all settled in now and just waiting to be a mum. As I don't have a rooster at the moment, I have no fertile eggs, and after the disaster of last time, I just bought day olds instead of fertile eggs. I have left a couple of eggs under her for the moment to give her something to sit on while she waits for the chicks.
Today's hour in the garden:
Moving the chook tractor, giving the chickens a dusting for lice
Posted by Debra K at 7:32 PM