I thought I would catch up on some school lunch baking today, it seems like ages since I have had a baking day, and the school munchies were in serious need of some topping up. I made some pikelets: 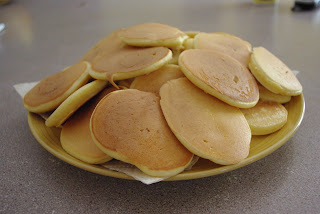 I also made some choc chip muffins 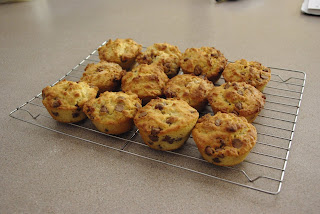 And also some cheesy vegemite scrolls 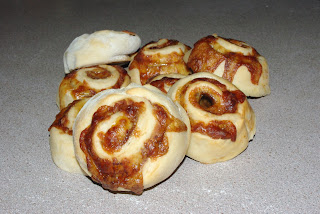 I also put on a batch of skim vanilla yoghurt using the simple savings recipe, I have tried the suggestion of another forum member and used long life skim milk, instead of full cream powdered milk. It seems to be thickening up ok, so I will see how it is a little later on tonight. I have never been able to get a skim version of the simple savings yoghurt using powdered milk to work, so if this works it would be great, it works out about the same cost, maybe 20c a litre dearer using the long life milk.  I usually use full cream powdered milk with a couple of tablespoons of the greek yoghurt starter powder and it ends up so thick that the spoon leaves a scoop mark in the yoghurt, I don't think the skim will end up quite so thick, but as long as it is thickened to a point, then that's fine with me, as I don't usually eat too much of my home made yoghurt because it's not a skim version.  I also gave the pantry a wipe out and cleared out some old, unidentifiable stuff in the bottom of the freezer as it's bin day, so my baking will now fit in the freezer!  So it's been a productive day in the kitchen.

I also sowed about 60 climbing beans, 70 peas and 8 golden nugget pumpkin seeds this afternoon. The corn I planted a couple of weeks ago is starting to shoot through the mulch, but no sign of the (kent/jap?? not sure which one they are) pumpkins yet...not sure if they will take as the seeds are a couple of years old, so I may have to dry some more and plant them out if the ones from a couple of weeks ago don't take...

I am going to have a look at the Ekka program, I would really like to go this year and watch the ring events and look at all of the judging etc....Damian loves the woodchop, I love watching the horses and the sheep dog trials and the night time events....Kasey, well she just loves the rides and side show alley and the showbags of course....so with the clash of what the adults like and what Kasey and her big brother and sister like, it makes it hard to go and for us all to enjoy ourselves.  May have to make 2 days of it, 1 for Kasey and 1 for Damian and I....just don't know if I could stand 2 days of the show....we did go last year, and we usually make a point of only going every 2nd year....we'll see what happens....
Posted by Debra K at 8:03 PM