Back on the farm quilt progress and vege garden overhaul

Saturday and Sunday night I spent doing my back on the farm quilt. I have been working on 4 blocks together, and I now have 5 of the 9 blocks completed. I have a Block of the month class for this on tomorrow, so I am going to trace out the remaining 4 blocks, and make a start on finishing those off. Here is what I have done so far.
Piggy Back Ride

Pigs in a Blanket 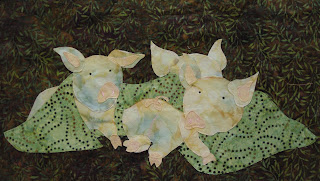 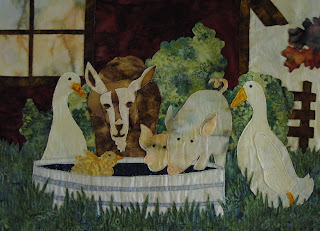 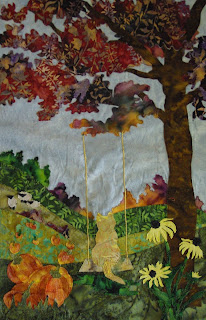 Top half of quilt arranged together. 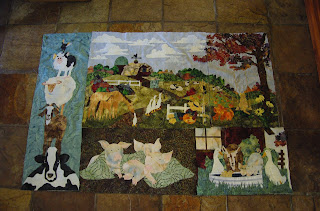 I also went out yesterday and pulled out the pumpkin vine, and dug manure in and re-mulched both beds. It is now all freshened up, waiting for some fresh plantings. I will plant the pumpkin seeds shortly, and I have a few seedlings coming on, so will plant those out when ready. I also need to put in some supports for the tomatoes and pumpkin to grow up. Here are the beds all freshened up. It was a hard day's work, but needed to be done. Max dispatched of another rat in the storage shed, there doesn't appear to be any more in there, but I think they have moved to the big shed, so have had to put some rat baits in there. I hate using it, but they are getting out of control in there, and there is no other way to get rid of them. I really wish there was another option. I purchased a big enclosed rat station some months ago and only rats and mice can fit in there,  which keeps the other animals and wildlife safe. 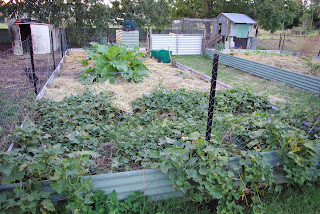 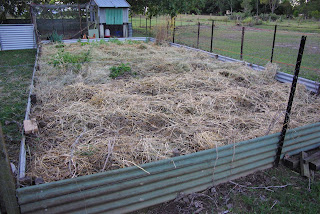 I pulled out the last of the pumpkins, there was 3 growing,  1 @ 2.4 kg, 1 @ 4.2kg and 1 @ 5.5 kg's, so hopefully with the few already stored plus these, it will be enough until there is more to pick.  I was going to do some mowing yesterday, but Max has a bad habit of biting the front wheel on the ride on when it starts (as do most cattle dogs it would seem) and he bit a big hole in it, so I had to get Michael to take the wheel off for me, and I dropped it in to get fixed yesterday afternoon, and picked it up this morning, so will be able to mow again, even though time will be serioulsy lacking now until the weekend. It cost $30 for a tube repair, seems pretty expensive to me, but I don't know what is involved in repairing a ride on tyre or if the tubes are more expensive for these, it just seems a lot for a tube....
Posted by Debra K at 5:49 PM