We arrived home from our short break yesterday at about 2pm. Had a really nice time. We drove out to Yeppoon on Thursday from Rockhampton, it is a beautiful spot, really liked it there. Had a drive along the coastline, we stopped for a play at a playground for Kasey, and then went and had some lunch and a look around. 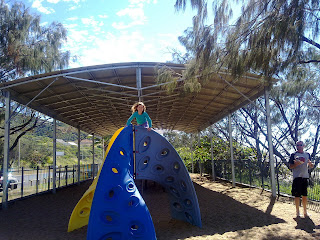 The Singing Ship in Yeppoon, honouring Captain Cook sailing through the area. 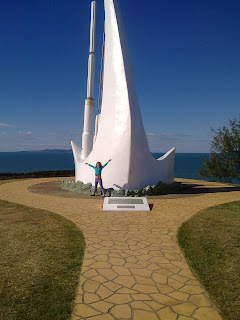 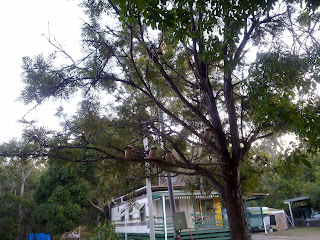 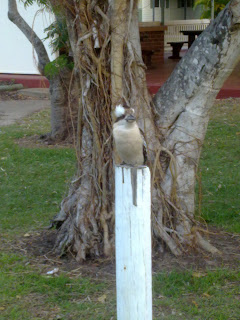 The Kookaburra's waiting for some food at Tannum Sands.

There is so much to do around Rockhampton and in the areas nearby, but we just haven't had the time to do them, but would definitely look at coming back and spending a couple of weeks looking around. We moved on to Tannum Sands just outside of Gladstone on Friday, another really nice spot.  On our way there, an emu appeared out of nowhere on the road in front of us, Damian had to swerve a bit to miss it, it was very surreal seeing this huge emu just appear in front of us, and trying to miss an emu with a huge caravan on the back was a bit tricky...We went for a walk along the waterfront at Tannum Sands and Kasey had a play in the playground, there was a flying fox here so she was very happy.  We think  it would be really nice to come here for Xmas other than the signs warning about stingers and crocodiles!!  They seem to have a dedicated bathing reserve, so need to find out a bit more about that before we would look at heading there for Xmas. On Saturday morning we packed up and headed to Bundaberg. We typed in "shortest route" on the GPS and ended up doing about 40 klms on a gravel road, which was a bit of a worry as we were hoping it wasn't leading us in to a dead end where would end up in someone's paddock, but we managed to get there in the  end. At one stage we were following a huge Brahman bull that was running along the road, which was quite funny...it didn't know what to make of us....We pulled in to our friends place about 1.30 in the afternoon, and had a really nice catch up, and they cooked us up a beautiful BBQ for dinner and breakfast the next day.  We said our goodbyes about 9.30 in the morning, and got home a little before 2pm. We were both pretty bushed last night, travel takes a bit out of you, especially Damian as towing a large van definitely keeps you on your toes and wears you out pretty quickly. I have been confronted with a huge pile of catch up work today, which I will need to get stuck in to this week, as I haven't been spending much time in the office lately (trying to avoid it) so now have lots to do. I need to go and drop back some library books, and quite a few other bits and pieces, luckily I have a fairly light diary this week, so this will definitely be a catch up week for me.
Posted by Debra K at 11:44 AM