I have a worm farm!

Yay...I went to Bunnings yesterday to buy 2 things....and none of them were a worm farm...hehehe....Damian should know better than to send me to Bunnings on my own....I do love that place....anyway...I have been meaning to get a worm farm for ages, and seeing as how I am doing the permaculture course, thought now was as good a time as any.. So I purchased a "worm cafe", it comes with a tap to get the liquid out from the bottom, which I thought was worth the little extra $.  I also bought 1200 worms to go in it...which I thought sounded a lot, but apparently this is about the minimum to get. So when I got home, I went about setting it up, this is all new to me, so after reading all of the instructions, soaked the coconut fibre, spread it out in the tray, added the worms, covered them with damp newspaper and the hessian mat I bought and set them out in the shade of the greenhouse to settle in. Kasey knew way more than me about setting up the worm farm, as they set up one at school last year..so she was offering advice left, right and centre about how to go about things! Anyway, Kasey went out to check on the worms this morning, and came back in to tell me..."Mum, I have some bad news about the worm farm...the worms are escaping!"  So out we went, and scooped all of the worms back in...I don't know what wasn't quite right for them, I have taken the hessian out and just left the newspaper in for now, and they seem to have all buried themselves in nice and deep back in the fibre, and I have given them a few scraps as well to start them off, so hopefully they are happy enough to not want to get out now...and they can start their work of chewing and pooping and making some lovely castings and liquid fertiliser for the gardens! 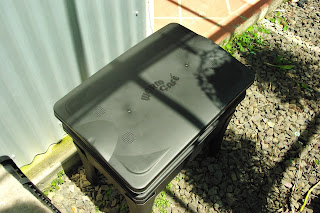