We got back from our holiday on Sunday. Always nice to get away for a few days. One of the chooks came down sick a few days back, after doing some research on the net, I concluded that she had coccidiosis...I think that has been the culprit with the other couple of girls I have lost recently..and it has been spreading through the more vulnerable girls.  I treated her with Sulpha D, and she has come good now, and I have returned her up with the other chooks. Now that I know what I am looking for, hopefully I can now keep it in check. I will need to give Damian the hurry along with the chook tractor, and give the ground in the current chook pen a spell, and try to get rid of any parasites that have built up in the soil, as the chook house has been on the same ground for many years. Hopefully now we are over the worst of the sick chooks for a while. Diesel has also been in the wars, he has banged his head really hard on something while we were away and has a huge boney lump on the back of his head, it's nearly as big as a golfball.
(Diesel has a huge egg on the back of his head) 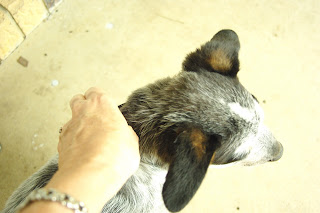 I have taken him to the vet, and he is on some anti inflammatories, this is day 3 of being on those, and it really hasn't made any difference to the size of the lump yet, so if no better by Friday, I will contact the vet surgery again. He has also started mouthing toads, Monday night I thought I was going to have to rush him to the vet, as he got quite sick, even though we had washed his mouth out, but then I contacted the after hours vet, and she gave me some info on what to look out for, and also to wipe his mouth out with a cloth instead of washing it, to get rid of the slimy poison, as soon as I did this, he came good. And then last night, he came to the back door whimpering again, and was foaming at the mouth again, so I wiped it out first thing this time, and he came good within a couple of minutes. Damian is going to do the rounds of the yard with Dettol again to kill off the toads that are starting to hang around.
Tomorrow is going to be very exciting, it is day 1 of the Permaculture Design Course I am doing.  It will be every Thursday for the next few months, and I am really looking forward to it. I hope my brain can deal with all of the theory that is going to be associated with it! I will post later in the week with the details on how it all went. I am looking forward to absorbing all of the info and putting it in to practice here. I have also received most of my book order that I put it at the beginning of the month, I will post about those a bit later as well. At the moment I am trying to continue catching up on paperwork, nearly there, it is almost full time in the office at the moment doing bookwork....but the pile is getting smaller.
Posted by Debra K at 2:02 PM