The firm favourite....and this weather!!

Out of all of the gifts Kasey received for Xmas, there are a couple of firm favourites....the green machine, a set of walkie talkies, and the swimming pool toys. This was the theme I was going with this year, activities and toys that gets Kasey outside, and can be used over and over again. So even though the weather hasn't been very favourable, she has been riding her machine around (and around and around) the verandahs, and been having great fun with the walkie talkies....she also received lots of crafty and scrapbooking things, and this has been getting lots of use also, and I have received lots of pictures and cards in the last couple of weeks from her new stash. She has also been getting lots of wear out of a couple of new items of clothing and some new togs. 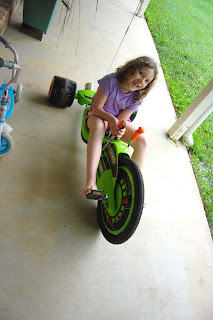 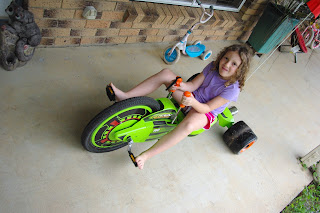 I still ended up with sooo many things to try and incorporate in to Kasey's room, which is pretty normal with Christmas and kids...and I can't really go through and take out the things she no longer uses while she is on school holidays as she brings things back in as fast as I take them out!!  Kasey is a major hoarder....so her room will get sorted when she goes back to school, everything is tidy and put away for now...which is the main thing.   We have been having really heavy rain here again this morning, it was so dark when  I got up at 6, I could have easily rolled over and stayed snuggled under the blankets, but I have a courier coming this morning, so had to get up..typical though, last week when I didn't know they were coming they were here just after 7.30 and woke me up and got me out of bed, today when I got up early so I would be ready, they haven't turned up!!

Everything is so wet again now, I think the grass is going to be a couple of feet tall by the time things dry out enough to get the mowing done....however, I don't mind....we have nothing to worry about here other than some long grass and having to wear gumboots in the yard, much better than having to wear gumboots in the house like our poor neighbours up north who are flooded are having to do. I look at pictures on the news where you can only see the roof of some houses....that would just be devastating, and the clean up would be horrendous, and some people are still waiting for the floods to hit, but at least they have had time to prepare and move their valuable posessions and their livestock, unlike the people up north. Mother Nature is sure reminding us right now that we are mere mortals, and she has complete control of things, and that we had better not forget it! 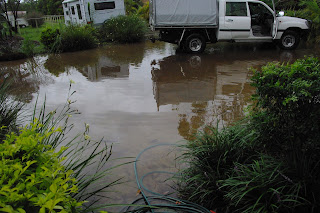 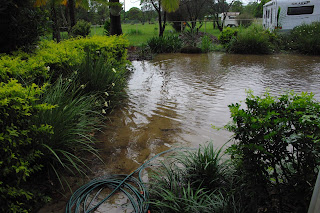 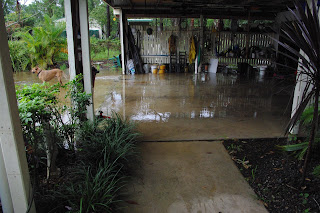 Fresh produce prices are going to hit the roof in the coming months, and things have been so wet in the gardens, that most of my produce has died so I basically have to start again, but it has been too wet to plant anything right now, as things are getting too wet and rotting and dying..I have stocked up on a few frozen vegies, and with bananas apparently going to hit record high prices, we will be sticking with the basic fruits for the next few months...my banana tree hasn't fruited yet...hopefully it isn't too far off now..
Posted by Debra K at 8:11 AM