Diesel had his surgery on Wednesday. He was meant to have it Tuesday, but a couple of emergencies came in, so they had to put him off another day. He is home with us now. He was very sore and stiff when we picked him up, but he is on pretty strong painkillers. He has spent a quiet night in the laundry, but he wants to keep walking around, and he's not allowed to for the next 10 days...hmmm...gonna be fun. Damian is bringing home some temporary fencing today, so we are going to make him up a penned off area half on the grass and half on the concrete so he can do his business when needed, but has to stay pretty quiet otherwise,  as he can't run around with the other dogs for 6-8 weeks...it's gonna be a loooonnnggg time for Diesel. 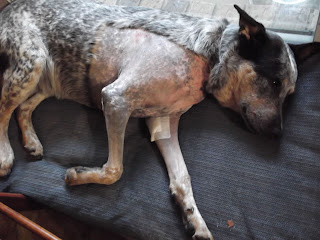 2 days later: Diesel is full of energy and wants to run around with the other dogs. He has escaped numerous times, had half destroyed the laundry, and was doing himself more damage by clawing at the closed door when he was supposed to be keeping his legs fairly still, and chewing the trims off the walls, so I tied him up outside with the other dogs, and he quietened right down. Then we had to go out for a little while, and came back to Diesel running around with the other dogs, as they had all helped him to escape!  We have built him a penned off area, and he keeps pushing under the fence, so we are now going to go and get some timber to nail it all down around the ground so he can't push under it. I think because they have removed all the spurs from his bones, he is feeling fantastic, but there is so much internal healing to do, that we really have to try and keep him quiet, but Diesel is not playing the game at the moment. So, he is inside with me, feeling very sorry for himself, watching the other dogs run around. 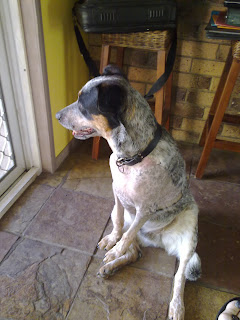