On my way back from up north last weekend, I picked up a large tray of mangoes from a street market stall. Today I thought I would use some of them up, rather than them going to waste. I am in the process of making mango icecream with the thermomix, but I forgot the cream, so we will make it for dessert tomorrow night instead, it only takes a couple of minutes. But I did get the mango chutney made. And it is extremely yummy, it is a thermomix recipe, and has a nice bit of spice to it to make it tasty, but not hot, and this mixed with the sweetness of the mango and raisins, is yum. 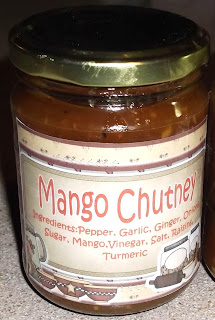 I played around about a bit with my scrapbook max software, to do up the label, as I might make some for Xmas presents. We do have another clucky hen, one of the black australorp girls is sitting, so I will get her some fertile eggs this week, and allow her to hatch some out. She is so funny, if I feel under her, or speak to her while she is sitting, she carries on like there is no tomorrow, cackles away and won't be quiet for at least 5 minutes....I purchased a new chicken feeder as Damian hasn't had time to make the necessary adjustments to the one he made, and we have so many rats taking the chookseed, so I have finally been able to put the lid to the fully closed position today, and they are working it out, with a couple of the girls very confident in using it, and they are teaching the other girls at the same time. We have managed to dispatch of a few rats this weekend, they were nesting above the nesting box at the chook pen, so Damian took the dogs down there, and promptly got rid of quite a few, the dogs are so quick, and the job is done in a matter of a second, much more humane than baiting them and them having a long, slow death. We have to get them all gone, as I have been stressing about snakes, and nearly stood on a huge snake this morning, I don't know if it was a black or a brown, it looked like a brown snake to me, but some of the black snakes can look brown as well....whatever it was I want it GONE.....snakes absolutely creep me out, I am terrified of them....it took off towards next door pretty quickly, and the neighbours aren't helping  by having grass 2 foot tall in their back yard, so I think we might have a word to them and ask them if they can keep the grass down, at least through summer when they are really moving about. So I will only be going down there with my gumboots on, and keeping a really good eye out from now on. We have seen more snakes here in the last 2 years, than we have seen in the previous 17 years here...ugh.....I shudder at the thought of them....Damian managed to get the skirting and arcitraves all done in the office today, and get it prepped for painting, so that will be next on the list. I have managed to get a few Christmas presents sorted over the last few days, so I am feeling much more organsied about that, even though I still have no idea what to get Damian, or Michael. Damian and I might even forego presents for each other this year, as we really don't need anything in particular...and we have a few other things happening during December and January which will more than make up for it. So, off to sewing class tomorrow to finish the project started last week, and to finish organising Toni's Xmas present. I have a busy week coming up, Diesel's surgery is Tuesday, I have a wedding on Thursday and the sewing club Xmas party on Friday night. After that, things should settle down though for the run in to Christmas, hopefully
Posted by Debra K at 9:50 PM