Tagging the cattle and improving the yards

We spent our weekend here out in the heat, doing some work outside. I am not a fan of summer, I would rather do things outside from autumn through to spring when it's cooler. Damian had to hire a dingo digger to do a plumbing job on Saturday, so we hired it for the weekend and did some things around here. He dug some trenches to bury the poly coming from the dam up to the top tank underground, he also ran a trench from the tanks to the chook pen so I have water there instead of lugging buckets of water over each day. We also dug LOTS of holes for future use, for planting trees etc or burying the odd chicken that dies. We dug holes down at the cattle yards for the corner and strainer posts to build our laneway in to our cattle yards. Most of our cattle will go in to the yards fairly easily with a molasses bribe, but we have a few that refuse so by having the laneway, we hope to be able to force them in a lot easier. We got 2 sections of fencing done, and just have one more run of about 50 metres to do to finish them off.
Our cattle are also being plagued by buffalo flies at the moment, and were due for worming again. A few came in to the yards while we were working down there, so I ran them through the crush and wormed and tagged them. I put hot pink ear tags in to identify them as ours easily from a distance, and I also put insecticidal ear tags in to treat them for flies. I put 4 girls through and the bull. We have 14 to go, so will try and do them one afternoon this week. It makes it so much easier by ear tagging them as I know which ones I have wormed and which ones I haven't. It was very hot, but we achieved a lot. 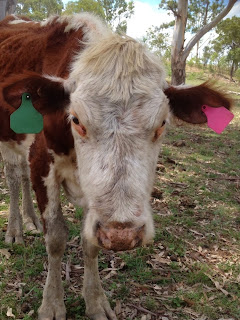 (Hertie Gertie, our mini hereford, after tagging)
We got just under 30mm of rain here last Thursday, so the cows should have a bit of green pick to eat now hopefully. They have all lost condition over the last few months of dry weather, and with the flies giving them a hard time, they were starting to struggle.
The rest of this week will be spent working on finishing off Christmas presents, and then we will head down to Brisbane on Sunday or Monday to spend some time down there and spend Christmas with family.
Posted by Debra K at 1:52 PM